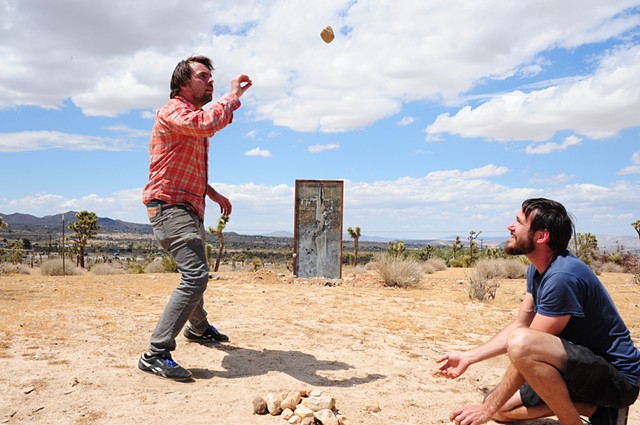 This is documentation of the destruction of one of the three concrete paintings titled "Ghost Doors", exhibited at Roberts & Tilton in 2013.

After the exhibit, I decided these three paintings were too heavy (200+ pounds each) to keep in storage. (The original paintings can be seen under "Ghost Doors" in the PAINTING section.)

I chose three unique ways to destroy each painting, documented the process, and created a new photographic collage for each one. (The photo collages can be seen under "Ghost Doors" in the PHOTOGRAPHY section.)

Ghost Door #2 (on left) was exhibited outdoors for a group exhibition at Outpost Projects, Joshua Tree, CA in 2015. Visitors were invited to stone the painting throughout the exhibition, and they were instructed to take out their anger and frustration on the painting. This became a performative action: the participants completed the painting by stoning it with rocks. The final action was to document the destruction before burying the painting on the property of Outpost Projects, where it currently remains.