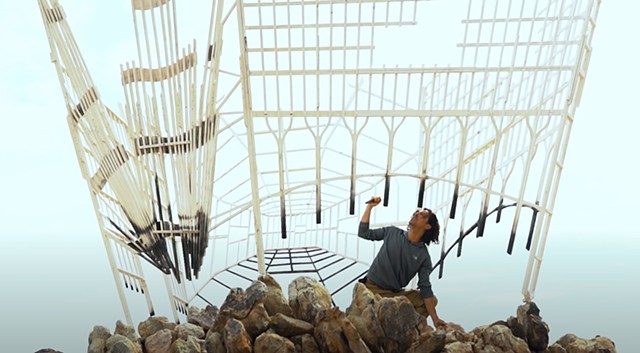 I wrote and delivered this 27 minute sermon/performance for the 20th anniversary of the 9/11 attacks. I reinterpret the Abraham and Isaac narrative from Genesis 22 as God's existential crisis, and create a throughline from that moment to the present. Humanity is in a doom loop of competing ideologies, each one vying for supremacy, to the death.

"Hernandez’s performance inscribed this tangled narrative onto the Californian desert. This entailed its own sort of sacrificial effort. Planned over the course of two years, Hernandez and friends carried the component parts of the sculpture to a site on government-owned land east of Twentynine Palms, to a small mountainous outcrop he named, after the biblical narrative, Mount Moriah. They only managed the strenuous task over multiple campaigns.

Assembled at the mountain’s peak, Akedah Altar was an ephemeral memorial to the biblical trauma, and scene-setting for Hernandez’s furious twenty-seven-minute performance meditating on the implications of the Akedah. It considers the biblical legend from within a narrative of personal rupture: Hernandez’s religious disillusionment and becoming a parent around the time of the September 11 attacks. The sermon excoriates the Akedah for its patriarchal cruelty and nationalism and marks out Hernandez’s sustaining sense of exile from the religious tradition that until then had shaped his life."